Why is it a day off never really feels like a day off? Its because if you are ANYTHING like me, you leave every little miniscule task of life until that 24 hour window. As a result  you are feebly (that being the applicable term) attempting to cram them all in one day….sinkful of dishes, no socks, a pile of mail so high all you can do is look at it in utter exasperation. And as you slice your hands open with numerous papercuts, you think to yourself, “Really? THIS is my day off?!?”

That aside, I did drink some interesting beers today, two in honor of my alma mater, Appalachian State University and my years there with my sister, Kimberly. As I have mentioned, going to school in a hippie/ commune/ vegetarian/ Birkenstock/ Grateful Dead loving community such as Boone, our main drinking preoccupation was craft and imported beers.  Where’s the connection? I’m not sure.  Hippies love good beer I guess…Not that we had the myriad of options people have now, but we were drinking beers like Samuel Smith’s while we had jugs of Carlo Rossi in the fridge. Yeah, the wine culture was not so much.  But boy we prided ourselves on the nights we would have a keg of Oatmeal Stout instead of Icehouse. All in all, some good house parties.

Highland Oatmeal Porter: ABV: 5.8% This was our first beer of the evening, as I have not had sip one of this beer since college, and we were both dying to see if it was as our time-addled brains remembered. Well….it was not. Firstly, the Highland website describes the color as black. No way. That Brooklyn Black Chocolate Stout from last night was black.  This was a darker caramel color. Not that this is a bad thing. We stick our noses in our glasses, and Kim’s first words are “It smells like Boone.” I crack up.

After some conversation, we decide the nose is most definitely one of molasses, brown sugar, and burnt caramel. It reminds me of when I am in the kitchen making a dessert and sweet things abound, I have my hands in 10 bowls, and….I overcook the caramel.  Just like that.  Again, not a bad note here, because it is not too overwhelming.

The palate is unexpected though, as tons of tobacco launch an assault on the finish.  Its a little too much. I would say that needs to be dialed back a notch.  Tobacco is great, but too much and you can’t think of anything else.  There is a bitterness on the finish that reminds me of black coffee, and as I have said I am a big fan of a bit of bitterness to cut through the intensity of other notes.

Overall, I would say that this beer has good aspects, but needs some balance between the nose, palate, and finish. I have heard tale that Highland’s Black Mocha Stout is the bee’s knees, but have been unable to acquire it so far for this tasting…any leads? Send me a message!

And so, with this beer, we begin the conversation of oatmeal stouts….

Originally prescribed to expectant and lactating mothers in 19th century England, oatmeal stouts were not only considered nourishing to women, but comprised a part of many workers’ daily diet. In a time when food shortages were commonplace, and wages were tight, poor workers drank stouts and porters to supplement what little food they could acquire.  History is just AMAZING to me.

According to Samuel Smith’s website, the last of the oatmeal stouts were produced just prior to World War I, and was not revived until the 1980’s by Samuel Smith brewery.  All I can say is THANK YOU SAMMY! This beer has, is, and will always be a classic.

A rich dark color with a lighter head than expected! Cream colored at first which becomes darker as you swirl, but a good appealing appearance. You want to drink this beer the second it hits your glass. Neither Kim nor I could wait to charge our noses in.  Lots and lots of dark chocolate with a woodsy fireside aroma followed by a distinct aroma of yes….holiday roasted pecans.  Let me be clear here. Pecans. Not walnuts. Not almonds. Sweet coated pecans like Judy Kozarec makes at Christmas. Yummy!

The entry packs a wallop of brown sugar that even goes into the nose. But this is not a sweet beer. Is that oatmeal I taste or is it only the power of suggestion? Being the oatmeal fanatic I am, you would think I could pick that one out. But alas, I can’t so I won’t say its there or not.

After enjoying this well-made and delicious beer, my sister turns to me and says, “Its amazing how this really brings me back to Boone.” And there it is people. Our sense of smell has the power to take us to our faraway land of memories, and that is a beautiful thing. Being a wine and beer geek, this happens to me every day. One day its my grandmother Ruby’s blackberry cobbler, the next I am standing in New Zealand in the rainforest.  It is said that smell is our most powerful receptor and connection to our memories, so get those schnozes out people and start sniffing away. Because we may lose alot in life, but our memories are forever. Cheers. 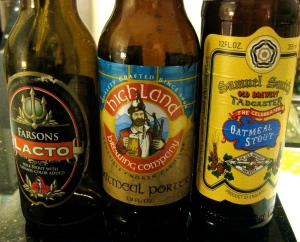 So I took a page out of Stewie’s handbook from Family Guy and giggled the whole time while writing that….but I do nonetheless have some issues with this beer.  On the positive, the nose on this beer is quite intriguing and truly unlike anything else I have had so far. With strong notes of dried currant, blackberry, fig and date, I am instantly taken and proceed to dive my nose into the glass over and over. This is completely unexpected! Vanilla comes out after a few minutes, but over time it is the fig and date that dominate.

Here comes the problem…As I noted above, the mouthfeel is cloying and like syrup, an aspect you can predict when you swirl in the glass and it lingers on the sides.  Remember what I was saying about bitterness and acidity as crucial aspects in beer and wine, respectively?  It in a sense acts as a scrubber on the tongue, to cleanse the palate and prepare you for another sip. In fact, it is what ENCOURAGES you to take another go.  If not, that lingering flavor just sits. And sits. No good. I gotta be honest, I had a hard time choking this one down.

So all in all, I am not sure who drinks this beer.  In my mind I picture a dark British or European pub with old, grizzly men sipping on this at 7 am.  My other thought was someone who wants beer AND coffee for breakfast, but can’t decide which, so has them together in one liquid. Because, ultimately it strikes me as a drink akin to a cold coffee with a ton of sugar poured in.  Not my cup o’ tea. In conclusion, if you are neither of these type of people and you still like this beverage, more power to you.

Mendocino Brewing Company Black Hawk Stout: ABV: 5.2%  After arriving home, and climbing under the covers, I decided I HAD to have a beer to get that Milk Stout taste out.  So as I have been writing this post, I have been drinking the Black Hawk Stout. First off, love the name as I am more than fond of hawks (I have one tattooed on my back), and most of their beers are named for types of this flying powerhouse. Located in Ukiah, California (I have NO idea where that is), this brewery is unique in that they bottle-condition not just one but several of their beers, including this one.

So what does that mean, bottle-conditioning? Basically it means that a secondary fermentation is initiated in the bottle by the addition of yeast after the regular or primary fermentation.  In still wine, this is a disaster you do NOT want to happen, but in beer it provides the carbonation for the beer eliminating the need for adding artificial carbonation. Mendocino holds their beers for 2-3 weeks for the process to complete and then sends them out our way.

On to the beer….My first whiff is a dark, bitter chocolate that soon develops into wonderful aromas of campfire and charred wood. Talk about memories.  As the beer warms to room temperature, definite notes of caramelized sugar arise. The palate is rich with that same dark chocolate and subtle smoke, but smooth and easy. The finish is drying, which like wine, begs you to take another sip. A truly welcome aspect after the previous beer.  Overall, a pleasant and drinkable stout, not terribly complex or life changing, but good.