Wednesday night was all about The Avenue Pub , yummy beer, and vittles. Friends both old and new gathered ’round the bar and took to some serious pre-Thanksgiving drinking.  With the chilly wind circling just outside, we were toasty as bugs in a rug with our dark brews and delicious Janita’s cooking.  I mean cheese grits at night? How awesome is that? By the way, its not on my list, but Brother Thelonius on draft at the Avenue is one of the best beers in the city.  Get your wide load Turkey-filled behind over there and try it. I’ll do the beepy sound for you.

Nogne O Holiday Porter: ABV: 7% This was my first brew of the evening, and like Goldilocks, I thought it was juuust right to put me in the holiday spirit. Nice notes of maple syrup and lightly roasted coffee to greet my inquisitive nose.  A smooth, welcoming palate with an easy finish made this go down like water.  And so it did the first time. Hence, I had to order another, as I actually DID want to smell and taste it after warming up a bit. And I’m glad I did, because hoppy apricot aromas arose with a touch of funk, which you know I ALWAYS like.  This is an enjoyable, easy-drinking porter.  Go on over to the Avenue while you can.  It will be gone soon!

Peculiar Yule: ABV: 6.3% As I am practically guzzling that first pint o’ porter, Polly comes over and says “You gotta try this.”  She hands me a warm pint of dark liquid, and I think, Glogg? But it’s dark brown. Heated beer? Uhhh… But that  woman knows what’s up, so I dive my nose into the glass.  Tons of clove and cinnamon.  Imagine a pot of mulling spices on your stove on Christmas morning.  It’s that smell.  Here’s the interesting part.  She THEN gives me the same beer cold.  UGH. Not good.  She explains that she thought the same thing, then read about the beer, and heated it, and Voila! A really interesting brew. But boy, they nailed the name on that one.  Peculiar it is…. 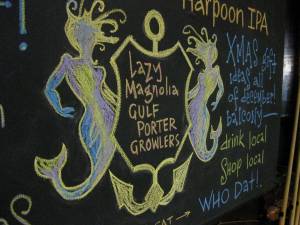 Lazy Magnolia Gulf Porter: ABV: I dunno, maybe 4.5-5.5% Released November 9, this guy is ONLY available in growlers at pubs and retail shops, including Cork & Bottle.  Shared amongst friends inside the cozy Avenue Pub, the Gulf Porter was quickly dived into and gulped down.  I have great drinking friends!

The initial nose was nutty, nutty, nutty.  Toasted almonds to be specific.  With some maple syrup drizzled on top. Add to that a definite oaty aspect that made me wonder if they used flaked oats in the process. Anyone? Then the two most interesting and unpredicted dimensions of the beer arose…1. definite evergreen notes, like spruce and fir trees!  No other holidayish aromas make an appearance, but the forest aspect is there. 2. An Asian note, like toasted sesame and soy.  Was NOT expecting that one, but there it was.  And I went back to it several times, to make sure I had not completely lost my mind.

As for the palate, for me it fell a little short, and the finish died off a bit too early.  I would have liked a little more follow through from the nose and some umph on the finish.  That is probably my single biggest complaint with porters in general.  So many just peter out on the finish.  Like a car that just gives up and you have to edge over to the curb in coast mode.  We’ve ALL been there. But overall, the Gulf Porter was a pleasant porter that I would like to see again in the future on draft.

Lazy Magnolia Jefferson Stout: ABV: 5% Hooray for a milk stout that I actually like, and would HAPPILY drink more than one of!!! I frankly was starting to have my doubts.  Thank you Lazy Magnolia for changing my mind.   This brew, a Sweet Potato Cream Stout, is smooth, delicious, and easy- drinking.  Polly at the Avenue Pub had the genius idea to put this beer on nitro, and I praise her for it.  As with so many stouts, nitro can make all the difference in the world to the mouthfeel and flavor profile.

Brewed with sweet potatoes (ahem. I make a KILLER sweet potato souffle that I serve at Thanksgiving) and lactose, the Jefferson doesn’t carry that super-concentrated dried currant/fruit that the Farsons carried.  Or aromas like Fruit Roll-Ups. (Remember the Hitachino?) It smelled exactly like what I have been hoping/imagining a Milk stout would smell and taste like ALL along.  A creamy, coffee, dark chocolate, molasses aroma’d nose with a soft, milky mouthfeel.  Kinda like the Green Flash Double Stout was on the palate.  Chocolate milk. Or something similar.

And this hit the nail on the head. Add to that inviting, comforting aromas of brown sugar and maple syrup, and you have yourself a nice winter holiday beer.  Like dessert in liquid form, but without any cloying, heavy feel to it.  In fact, the palate is pretty light for that kind of nose.  Which is a good thing when you are sitting in a pub in the mood to get down and dirty with some dark beers.  Yes, I had more than one Wednesday night….

Thank you Polly and Avenue Pub for a great evening!! And many thanks to those who came out and supported me and Second Harvest Food Bank!! You guys are fantastic.