Punks. Revolutionaries. Ground-breakers. Barn-burners. Mad geniuses. All used to describe a brewing duo from the waaaaay north of Scotland, James Watt and Martin Dickie of Brewdog. This renegade pair are determined to change the face of craft brewing in the UK (and world for that matter), and as I like to say, they are “in it to WIN it,” as evidenced by their recent beer volley with a German brewery for the World’s Strongest Beer.

Their no-holds-barred approach to brewing has them dancing in the flames of controversy often, but I think those flames just tickle their feet, and they love it. In fact, their joie de vivre and fearless approach to brewing experimentation are just what the beer world needs.

When I heard James would be visiting Stone Brewing for a tasting, I knew a trek up the road to Escondido was a must.  With Dr. Bill pouring out Brewdog’s intriguing brews, James in his penguin suit, and a large-screen viewing of Stone’s visit to Brewdog in Scotland, the night was bound to be fun.  Several hours later, as I headed back to San Diego, I recalled both the delicious and the wonderfully mind-bottling beers I had sampled that evening:

5 a.m. Saint: 5% ABV: Ok,I admit it, my thought as I took the first sips of this deliciously drinkable beer was not its flavor profile, but promptly, “why oh why could I not have had this beer for when the Saints dominated in the Superbowl?” How perfectly appropriate!! But in my sensory defense, that instantaneous reaction came from its immediate likeability and perfect balance.

Nice bronze color with reddish highlights.  A lovely nose of malt, light caramel, and gentle spice are hit with a big, refreshing dose of citrus peel, herb, and pine.  Aromas follow through on the palate for a balanced, mouth-watering beer that I want to drink again. And again. But, (and imagine me with hands cupped to mouth), BOOOOO I cannot find this beer anywhere.  What a treat that I hope to have again someday…

Black Dog: .5.5% ABV: Produced in collaboration with Stone’s brewer Jeremy, this wheat stout has comforting aromas of dark chocolate, charred wood, toast, and campfire, with a swift wallop of hops for balance. Smooth, with some smokiness on the palate, the beer carries a considerable heft that leads you to believe a higher ABV may be involved. But at 5.5% you can enjoy this at leisure, without having visions of a blackout.

Tokyo*: 18.2% ABV: Ever seen the movie Battle Royale? Remember the sweet Japanese schoolgirls that turned out to be cold-blooded knife-wielding killers? Uh huh. That’s this beer. Sweet aromas of chocolate covered cherries, raisins, fig, and molasses greet the nose.  But lurking behind with a sheathed weapon, the Tokio’s ABV awaits. Twistedly intense. I WILL be reviewing this beer again in an upcoming tasting. Stay tuned.

Tactical Nuclear Penguin: 32% ABV: When Smokey Sings…(Robinson, that is)…he would say, “I gotta change my name.” This is one of the SMOKIEST beers I have tried. Now, given, I don’t have alot of experience with Rauchbier, but hell can it be more intense than this? Smoky, peaty insanity. And I liked it. BUT, I only had a tiny sample, so everyone hold tight for a full review of this later. I have a bottle of this at home waiting to be torn from its paper sheath. Cue a vaudeville teaser complete with a burlesque melody… 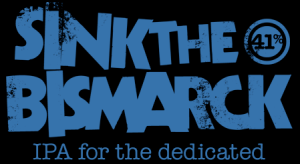 Sink the Bismarck!: 41% ABV: This beer is liquid guerilla warfare.  After the dethroning of Tactical Nuclear Penguin as World’s Strongest Beer by a German brewery, the fellas at Brewdog went to the trenches and released the ultimate strong ale, a Quad IPA with a cheeky nod to their German counterparts.

On the nose are wonderful vibrant hop aromas of grapefruit, citrus peel, and fresh pine needles, mingled with rounder notes of apricot, peach, and tropical fruit. It’s not precisely clear to me what I anticipated, but i suppose I expected the alcohol content to overwhelm the nose, and literally sear the hairs from the inside of my nose….What a pleasant surprise to not have the aromatic equivalent of too much wasabi on sushi. You know what I’m talking about!

But I’m no fool. I know I’m gonna feel the lightning bolts from Zeus at any moment, so I ever so gingerly take a sip….Holy sensory blitzkreig. I am rendered completely speechless. And numb.

The alcohol hits with gale force intensity, and all you can do is stare into your glass or out in space and wonder, “What in the hell did I just drink?” As your mind races to place it somewhere, to identify it with some other beer or spirit you have consumed, you finally accept the futility of such an endeavor, and just relish it, knowing you have had one of the most unique beverages on the planet….

Do your giggle box a favor and watch these two videos, on the Tactical Nuclear Penguin and Sink the Bismarck! Your jaws will ache with delight: