Who needs vision when you are talking about these two rock stars?

In other news, I look down at my selections for the evening and realize I have two beers with homages to animals in front of me now. A coincidence? Probably not, since I have had the upcoming Pints for Paws event in my head. CLICK HERE to see the event, organized by the one and only TheArtofBeer! And look for my name, amongst an awesome group of other beer lovers on the team list soon. If you are in San Diego, come on out for our furry friends!

For now, along with a definite canine-inspired beer, comes one of the porcine variety…..

Russian River Blind Pig: 6.10% ABV: Vibrant! Lots o’ hops with dominant aromas of pine. You know the smell when you cut limbs off of a new Christmas tree and the sticky sap gets on your hands? Also notes of rosemary and a I’m serious here…a bit of kerosene/petrol. Now hang on, I know what you are thinking. WHA? But this is not necessarily a bad thing folks.  I promise. In fact, it is actually a common and appreciated aspect to certain wines, in particular aged Rieslings.  So it IS out there in the aromatic world of delicious libations. As long, as it is not overwhelming (obviously).  And here guys, it is not.

I have always liked this early-Vinnie offering, whether on draft or in bottle, and nothing has changed. This is such a wonderfully made, classic example of IPA. Cheers to its timelessness amongst a sea of West-Coast IPA’s. 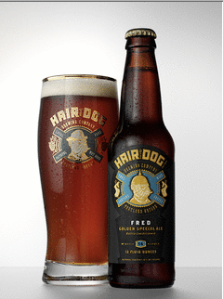 Hair of the Dog Fred: 10% ABV: A sweet, malty nose with notes of cane sugar, light caramel,toasted/grilled bread, and a bit of rosemary. As it warms, along with a sugar-coated candy, definite aromas of proofing dough arise. Ever had a sweetened sourdough bread?  My mother used to make a sourdough cinnamon version with a decadent sugary glaze throughout my childhood.  I would wake up on Saturday mornings praying she had made it. That was the smell here, minus the cinnamon.

Although this beer is labeled a Golden, it honestly drinks like a Trippel, with its sweet maltiness, and candy-esque aromas.  I liked this beer, but cannot see myself drinking a whole one by myself, especially when you add on it’s 10% ABV.  An interesting beer I would take to a group tasting. Would love to hear others’ opinions on it!

Here’s to the pig and dog, and the great brews they inspire….(Just wait ’til I get my black pot-bellied pig Tallulah and see what beer she inspires…)