A standing ovation to Dr. Bill and Stone Brewing Co.for throwing another amazing, incredible beer festival. This time with one of my favorite styles of beer, the almighty Sour. What a PERFECT  way to celebrate my Summer of Sours!! Yes, it was a hot July day in Escondido, but after over a month and a half of Pacific Beach marine layer, I was in sunlighted heaven….

Arriving at around 10:30 am, I knew I wanted a gentle, fruit-oriented sour to prep my just awakened tummy. My friends, Renee and Jordan suggested I start off with Lost Abbey’s strawberry sour, Russ. And so the tasting began. From there, it only got better and better. Just look at this list….(It’s okay to drool. I do a little reliving it.)

Lost Abbey Russ: A veritable strawberry smoothie beer! Bright and vibrant notes of freshly picked strawberries. Ever been fruit-picking? Imagine standing in the middle of a strawberry field with the aroma of the leaves and fruit all around you, and that’s your smell here. This was my breakfast.

New Belgium Tart Lychee: One of the more interesting sours of the day. A pretty nose of spring flowers and fruit. After living near Chinatown in New York, where lychee skins littered the streets and the smell of the fruit constantly wafted through the air (definitely more pleasant than the other aroma, fresh fish!), I felt like I was back on Grand. This is what I like to call a “rounded sour”, meaning it had no rough edges and wasn’t intensely mouth puckering. Definitely a sour to convert someone with, the Tart Lychee was a lovely treat.

Cascade Bourbonic Plague: Mmm. Dark honey, maple syrup, bourbon (of course!), oaky wood. A truly seductive nose. A rich and full, yet nicely sour mouthful of yumminess. I want to be under blankets with this one in the winter. Its a lovely sipper I hope to enjoy again.

New Belgium Love-Felix (dry-hopped): !! I put those because that was my reaction when I first smelled this. I have never had a hoppy sour, so I was delighted to try this juxtapositional beer. In fact, I was just having a conversation the night before about how sours and hoppy beers were opposite ends of the flavor spectrum in beers! A nose of hops and herbs alongside sour cooked apples. This is a nicely balanced beer that I thoroughly enjoyed and would like to have more than a taster of next time!

New Belgium Love-Oscar (spiced): Whoa. Nutmeg, pumpkin pie spice, fall leaves, cinnamon, and cloves. On the palate, chutney from an Indian restaurant. Thank you to the person who nailed that description, by the way. This is a fall beer, meant for blustery October days and Thanksgiving meals. On this hot day, it was a bit too heavy. Keep that in mind.

Cantillon Fou Foune: Holy deliciousness. Without a doubt, one of my favorites of the day. This beer, no longer in production, is a rarity indeed. So I savored every little taster sip. Made with apricots, this sour is so perfectly balanced, you would be hard pressed to find even the tiniest flaw. Wonderful fresh peaches and apricots on the nose and palate, this is a beer I can only HOPE I will get to drink again someday.

Russian River Deviation: Released in 2008, this wonderful brew was produced for Bottleworks’ 9th Anniversary. Apple cider, toasted sugar, oak, and bread toast. Deliciously developed and balanced, this reminds me of a well made wine.

Lost Abbey Duck Duck Gooze: As I have stated previously, this is one of my favorite beers of all time. Truly one of the most perfectly balanced gueuzes I have ever tasted. It ALWAYS delights and puts a giant smile on my face. Vibrant lemon and citrus alongside freshly cut herbs dominate the nose and palate. Like you’ve just finished chopping and slicing on the cutting board. That wonderfully refreshing aroma.

2001 Cantillon Vigneronne: I’m just going to go ahead and do this: !!!!! YES. This is what you call sour deliciousness. To the extreme. A wonderful aged Riesling-like smell of kerosene and petrol on the nose, followed by lemon and citrus. This is also one of the best beers of the day. I WANT THIS. And you should too.

Captain Lawerence Cuvee de Castleton Batch #4: I am absolutely thrilled when this emerges, as I have never had a Captain Lawerence beer! The first batch of this brew won Gold at GABF, and according to sources, Tomme Arthur was known to say this was the best domestic sour. So with those accolades, I knew I was in for a treat.

White grapes, oak, delicate spices, and honeycomb wax on the nose. This is a “Golden Ale fermented with grapes and spice and aged in oak barrels.” And it is delicious. I would love to have this again in larger quantities!

So what happens next? Much to our delighted surprise, someone pulls out…..

Captain Lawerence Cuvee de Castleton Batch #3: What a distinct pleasure to get to taste these side by side. This one is much more gentle, with delicate notes of grape (both flesh and skins), oak, and herbs. But still delicious. 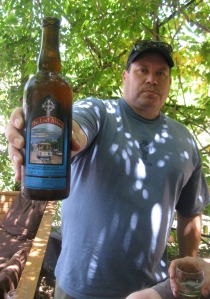 Lost Abbey Cable Car 2009: FINALLY!!!! I have been waiting to taste this beer. And waiting. And so, I nearly squealed with the delight of a school girl when my friend Christian told me he brought a bottle. Mmmmm to the Mmmmm. I LOVE it. Incredibly complex nose of yeast, proofed bread dough, wild field herbs, lemon and citrus, and even vanilla comes in. A wonderful sour punch on the palate with a nice, nutty finish. Yum.

And when I think I can get no happier, Christian then unveils…. 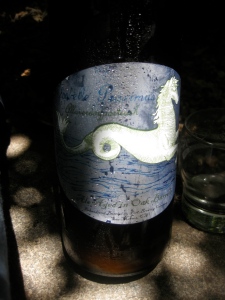 Isabelle Proximus: Another beer I have been eagerly awaiting. I mean, let’s be serious here folks. Any beer made by 5 of my favorite brewers: Vinnie Cilurzo (Russian River), Tomme Arthur (The Lost Abbey), Adam Avery (Avery Brewing), Rob Todd (Allagash), and Sam Calagione (Dogfish) is bound to be liquid pleasure.

This beer smells like the French countryside. Lavender, hay, and fresh air. I swear. Wonderful complexity on both the nose and palate, the aromas combine with an apple cider tartness to reveal a unique profile that sets this beer apart. I am thrilled to have had the opportunity to taste this collaboration brew.

Amongst other deliciousness tasted, but in the absence of my trusty notebook:

It was an absolutely GLORIOUS Sunday, and again my most heartfelt thank you to Dr. Bill, Stone, and all of my beer comrades for the BEST Sour Sunday on record.