Sigmund Freud has invaded GABF. Illicit thoughts race through the head as beers such as Sexual Chocolate and Old Woody are served with abandon. In all of their unabashed glory, these beers give us nothing short of…pleasure.

Foothills Brewing Sexual Chocolate, 9.75% ABV: FINALLY! How long has this North Carolina-born girl been waiting for this NC brew? Too long. I approached the Foothills booth with both anticipation and trepidation. What if they weren’t pouring it? My anxiety turned to unabated glee when I saw beaming (at least for me) from the sign.

Rich dark chocolate and creamy melted milk chocolate. Molasses. Vanilla. Coffee bean. Toffee. The notes just hit you one after the other, but are seamlessly integrated. There is a reason they call this Sexual Chocolate. Incredibly smooth and balanced. Dangerously drinkable. I have to find a way to get this beer again. Somehow. Someway. I have a future with Sexual Chocolate. Insert joke here. 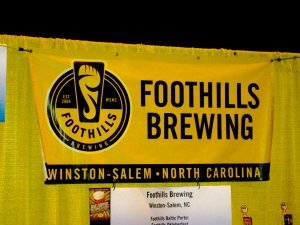 Under the brewmastery of Jamie Bartholomaus, Foothills Brewing is hot on the craft beer scene. Established in 2004, and located in Winston-Salem, North Carolina, they are known nationwide for their epic offering, Sexual Chocolate.  But they don’t stop there, with 16 other brews, including the delicious brews Hoppyum IPA and People’s Porter. And HANDS DOWN, they have the best graphics for their beers around. CLICK HERE to check out their lineup.

Main Street Brewery, Bob’s Old Woody, ? ABV: Having NO idea what this beer is, but suggested by several, I fearlessly put forth my glass for a sample.Nice fruit vibrancy on the nose. The beer is put in American Oak barrels, and boy does it show. Lots of vanilla, oak, and sweetness from the wood.

Only mildly sour (at least to this mouth-puckering fanatic), this beer is very drinkable.  I would call this a sessionable sour. One you could easily drink more than one of, as it seems to have a fairly low alcohol content. Although with barrel aging, it might just be a doozy! Nevertheless, this is the type of sour that you might introduce a non-sour drinker onto. Ease them in, so to speak.

Main Street Brewery is a 10-barrel brewpub located in Corona, California in conjunction with Lamppost Pizza. Pizza and beer? Always a great combo. Although tiny, and relatively unknown nationally, Main Street is the proud winner of GABF medals from 2000, 2004, 2005, and 2006. If you are in the area, you have to check these guys out!

MANY more beers from GABF to come!!