Yes, I LOVE that Jay-Z song and I play it on the jukebox at work incessantly. And no, I didn’t get to attend NY Craft Beer Week. I’m still boo-hooing in my Corn Flakes. Nevertheless, it’s time to show some love to a fantastic New York brewery, and while I’m at it, some other Atlantic craft brew stars…

Ithaca Beer Co. Excelsior Brute, 6.5% ABV: This Golden Sour was one of my favorite beers of GABF. And I said so into my dictaphone literally SECONDS before it was announced that Ithaca had just one Gold for the beer! 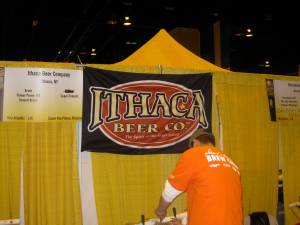 All of these aromas come bursting through on the palate. Incredibly defined, balanced, and well-crafted. Sour lovers put this on your wish list. Now.

Officially opened in 1998, Ithaca Beer Co. was founded by Dan Mitchell. While it is only distributed to surrounding states (Booo!), Ithaca gained national acclaim when they took home two medals at the 2008 Great American Beer Festival. And then taking Gold in 2010. This brewery is going places. Hopefully one of those will be California. Congrats Ithaca and keep up the great work.

Portsmouth Brewery Gose, 4% ABV: From the makers of the insanely sought-after Kate the Great Russian Imperial Stout. Most unfortunately yet unsurprisingly, this beer wonder was not served at GABF. So onward I go to try their other offerings, including this new to me style, Gose.

I am admittedly and completely unfamiliar with this style of beer, so I thought it would be a perfect new beer to review. I spoke with Tyler Jones, Brewer of Portsmouth about the style: Gose is an ancient style of beer, predating Hefeweizen. Originally from Leipzig, Germany, the making of Gose involves adding salt and coriander to the kettle. To achieve a sour character, Portsmouth adds a sour mash, rather than Lactobacillus or the funkiness of Brettanomyces.

This is a mild session beer for funk-lovers wanting to try something new. Natural aromas and flavors of hay, earth, wheat, citrus,and grains. Very mildly sour. For this sour freak, it’s just not enough. Not incredibly complex, I’m not entirely sure how I feel about this beer or style. I would want to try this again…

Began in 1991, Portsmouth Brewery is “New Hampshire’s original brewpub.” Known for their mussels, delicious daily specials, and of course, tasty beers, Portsmouth has become a cult favorite among beer lovers nationwide. My greatest wish from Portsmouth? A better selection of brews at GABF. With their incredible range of beers, (over 50 offerings!) I would have liked to have seen a greater variety. And also, please post pictures of your beers on the website. We wanna see!!!

Smuttynose Old Brown Dog Ale, 6.5% ABV: Having grown up with old brown dogs (my aunt and uncle had Chocolate Labs), this beer held an instant place in my heart. I only hope it taste like beer and not a dog….

Nice, easygoing brown with notes of caramel, dark honey, pie spice, orange peel, and a bit of nuttiness. Definitely goes down smoothly with all of those aromas following through on the palate. Would be a good Thanksgiving beer and to share with friends and family members not quite ready for the heft of Stouts and Porters. If you are a Newcastle fan or you know a few, this is a great cross-over beer into the Craft Beer World.

Smuttynose was founded in 1994, by the guys at Northhampton and Portsmouth breweries. They make a range of accessible and approachable beers, the most famous, their Star Island Single Session.  I am eager to try more of their brews, especially from their “Big Beer Series”, including a Imperial Stout, Farmhouse Ale, and one called Gravitation. Mmmm. 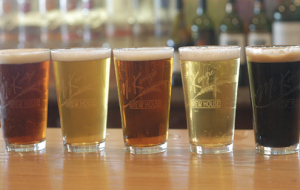 McKenzie Brew House Saison Vautour 6.5% ABV: The Gold winner of the Saison category, so you KNOW this Saison lover had to beeline it to their booth. Having tried so many, how would this one measure up to classics like Saison duPont, Fantome, and others? Well let’s find out…

The nose is a marvelous mix of pine, grass, hay, and citrus fruits, but here’s where my confusion sets in. The palate just dies on you. All of those aromas run headlong into a flavorless brick wall. How is this possible?!? Where did those magnificent smells go? I am befuddled and dumbstruck as to how this won GOLD. Stay tuned for the BEST Saison at GABF, and the one that should have taken home the medal. This brew had incredible potential to be a classic, but just fell short.

McKenzie Brew House has two locations in Pennsylvania, but beyond that I can’t give you much more information. No history or dates are provided on their website, which is an unfortunate omission to us beer lovers who care. If you know, love, or want to comment on Mc Kenzie (tell me I’m crazy to not love their Saison), please do! Would love to hear from you.

Stay happy, healthy, and drink beer. It’s good for you.