The time is upon us dear friends. My journey into the dark, oaky, sour, and bug-lovin’ world of  100 Barrel-Aged and Oaked Beers!!

(if you know without looking what these words go to, you are my instant friend.) 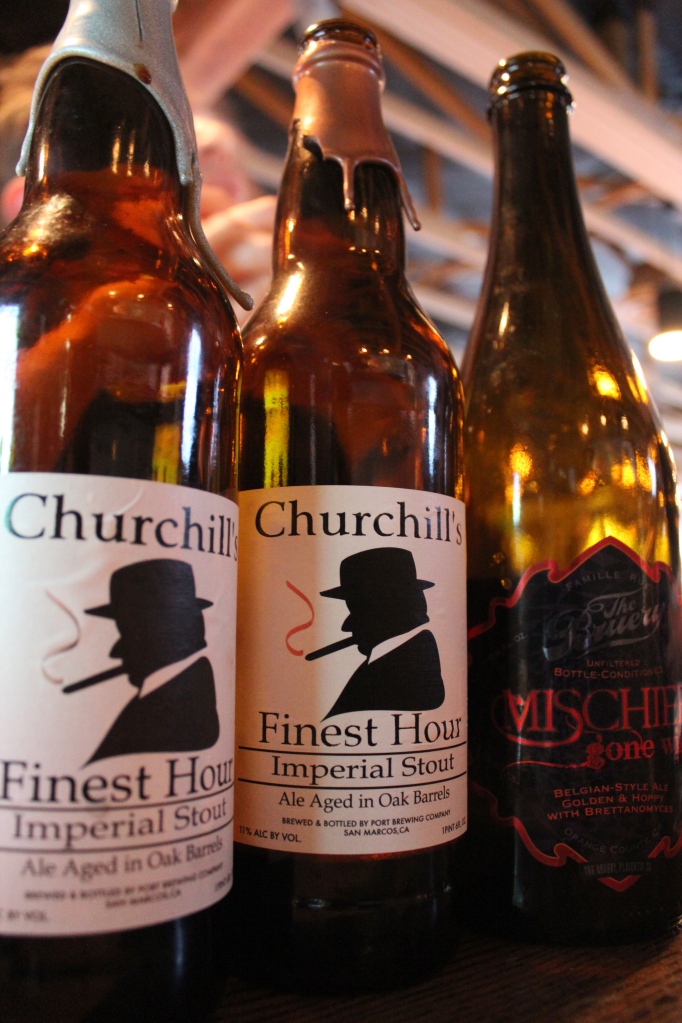 2012 Churchill’s Finest Hour, 11 % ABV: It was with the greatest pleasure that this rare and exceptional beer was my first of the challenge. Thank you to Richard! (who bought this in my stead when I was too sick to attend the release)

Absolutely luscious (as Lumberyard Tavern owner Lisa remarked), with intense, yet comforting notes of dark roasted coffee bean, dark chocolate, cigar box, blackstrap molasses, port syrup, and sweet tobacco, all blending seamlessly together. A timeless beer. Count yourself amongst the lucky few if you have one.

2011 Churchill’s Finest Hour, 11%ABV: More subdued notes all the way around. We (that’s me and a few fellow beer geeks) concluded that beyond the year of aging, the higher carbonation masked some of the rich flavors waiting in the wings. Had this not stood beside the 2012, perhaps all the more glorious it would have been. That being said, still dark and brooding notes of coffee, bitter chocolate, tobacco, and dried black fruit made themselves known.

Nine times out of ten I select the older aged versions of Imperial Stouts, as is the case with Speedway Stout, Dark Lord, The Abyss, and others. But the clear winner here was the 2012. So wonderfully balanced, with everything in exactly the right place, this was beyond a perfect welcome into my challenge.

The Bruery Mischief Gone Wild, 8.5% ABV: A refreshing treat after the massive presence of the Imperial Stouts, this Belgian-style Golden Strong Ale has seen the likes of my favorite little bug, Brettanomyces. The Bruery, like always, does it just right. No overbearing horsiness, just a pleasant dose lending gentle complexity to an already great beer. Beautiful, fluffy head with aromas of hay, grasses, citrus, yeast, and flowers, with a hint of sweetness. Flavors meld nicely with a mild bitterness and spice.

As a worthy note, Mischief was BEER #2 in my 100 Belgian and Belgian-style ales of 2010. So I have been hanging on to this beer for its grand and reinvented return.