The longest post of my countdown, but it’s time to wrap this baby up and move on to the next  challenge!! So here they are folks, some of my favorites of the countdown saved for the home stretch of reviews:

Nebraska Hop God, 10% ABV: One of the most memorable of Stone’s Oakquinox festival (it ran out in record time), and my challenge, I loved, loved, loved this beer. Aged in French Oak Chardonnay barrels for 6 months, this Belgian-style IPA turned Tripel kills it. Gorgeous nose of flowers, fresh citrus, white peach, & hay. Nice hop kick with Chardonnay vinous notes. Wonderfully balanced. This one belongs in a beer dream. 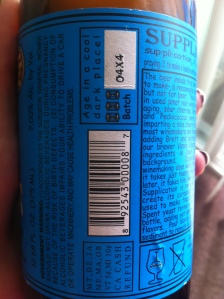 Russian River Supplication, Batches 4, 7, & 10, 7% ABV: All three consumed during the challenge, but here I will only count it as an extra, since I have reviewed it many times before! The point here being is the amazing consistency and incredible craftsmanship that is Supplication. Batch 4, pictured here, is drinking beautifully. Good bit of sediment there, so pour carefully. Wonderfully balanced with the right amount of tartness. Still and always one of my favorite sours of all time. CLICK HERE and HERE to see for more in-depth notes and past reviews of other batches. 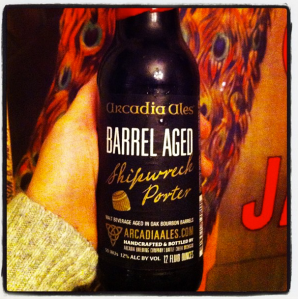 Arcadia Ales Bourbon Barrel Shipwreck Porter, 12% ABV: When I met the owner of Arcadia Ales at CBC 2012, he told me the ONE beer he hoped I would try from Arcadia was this one. So imagine my delight when it arrives in a package from a fellow beer lover a week later!!

As a longtime porter fan, my hopes were high. And as a grin spread across my face, I knew immediately I would be pleased. One of my favorites of the countdown, this delicious brew has notes of (are you ready for this list?): Chocolate, bourbon, dark caramel, coffee, molasses, raisins, figs, oak, & vanilla. Wonderful nose!! Richness follows through on the palate, with a smooth mouthfeel and finish. There aren’t a preponderance of barrel-aged porters out there like the stouts, but this one stands out as one of the best.

Norrebro Bryghus Tripel de Lente aged in Sauternes barrel, 9% ABV: As I arrived late to the pre-reception to the 2012 World Beer Cup, I wondered if there would be any good beer left to try. Beer geeks flooded the halls and ballrooms, so I nervously approached the table. People snatching beers left and right from their icy baths. Ooh missed that one! And that one! I scanned the ice, and I caught sight of a beer being tossed around, lonely and ignored. I looked around in astonishment, and plucked it from oblivion. It was this beer.

Laurie steps on soapbox: I am rather tired of beer lovers criticizing and insulting me for loving wine as much as beer. Listen up folks. I come from wine, all of my knowledge comes from the wine world, and I am not about to apologize for it. Prepare yourself: there are stretches were I drink no beer, and only wine. BUT, the opposite is also true. There is nothing wrong with that. My tastes fluctuate, and frankly I’m not one-dimensional.

In fact, I believe being from the wine world gives me a unique, well-rounded and more educated perspective into the world of beer than other beer reviewers. My ability to nail aroma and flavor profiles comes from years of wine tasting.  And particularly with the meteoric rise of barrel aging, and the best breweries in the US using wine barrels to age their beers, I am doubly perplexed with the attitude. And this beer was possibly looked over as a result. So please don’t preach to me that I am not loyal enough, or “Oh no! You are drinking wine!”, or a snarky, “Um, why aren’t you drinking beer?”, and then sing the praises of breweries like Russian River and The Bruery. Ok, I think I’m done.

Beautiful aromas of apricot, peach, honey (classic Sauternes notes), with oak, yeast, and candi sugar rounding it out. Viscous mouthfeel, with a sweet finish. Definitely a dessert beer, this would pair beautifully with a peach cobbler or panna cotta.And a huge thank you to this brewery for the brilliant idea of aging in Sauternes barrels. Could not have been a inexpensive decision, but well made.

The Bruery Vitis series Oui Oui, 8.5% ABV: Truly one of the most interesting beers of the countdown. The Bruery aged their sour blonde in wine barrels with Chardonnay grapes. Brilliant idea. I literally sat there and stared at the glass for a few moments. And then I knew I had to drink it in a wine glass! This might be THE beer to cross over those hardcore wine-only drinkers into Craft beer lovers. Drinks somewhere between a French Chardonnay and a sparkling wine. Dry, tart, and refreshing with notes of apple, pear, and yeast. Highly drinkable and enjoyable. Thank you Bruery folks for this one.

Giradin 1882 Black Label Gueuze, 5% ABV: A true classic, this beer should be on everyone’s checklist of must-have beers. Priced at around $12 for a 375ml, you will drink this down so fast you’ll wonder if your money was well spent. But with every perfectly balanced sip, you will know that you have. Refined notes of lemon citrus, malt, yeast, and spice, with a subtle woodiness. Only slightly sour, this beer is incredibly drinkable, and a great crossover for those venturing into tart & sour beers.

The Bruery Sour in the Rye, 8.7% ABV: If there is a rye beer anywhere within my grasp, I want it. So when this one landed at our table at the 2012 World Beer Cup, well, needless to say, I think a squealed a little. A sour rye beer? Intrigued to say the least. Definitely sour, with notes of lemon, yeast, and oak. Mingle that with the bready spiciness of the rye (40% as base malt), and you’ve got yourself one interesting brew. The talk of the table, The Bruery has done it again.

2010 Three Floyds Dark Lord, 15% ABV: So this monster baby of my cellar has been aging for 2 years, and I knew this challenge was the perfect time to pull it out for age-testing. Still a behemoth of a beer and truly one of the most interesting and complex beers I have had to date. At this stage in the game, much of the darkest notes are showing themselves, namely blackstrap molasses, dark chocolate, espresso, soy sauce, and raisin. Viscous and devilish on the palate, this beer is only for the most stout of hearts. What will show next year, and the next? As your beer obsessed gal with several bottles to go, I will report…