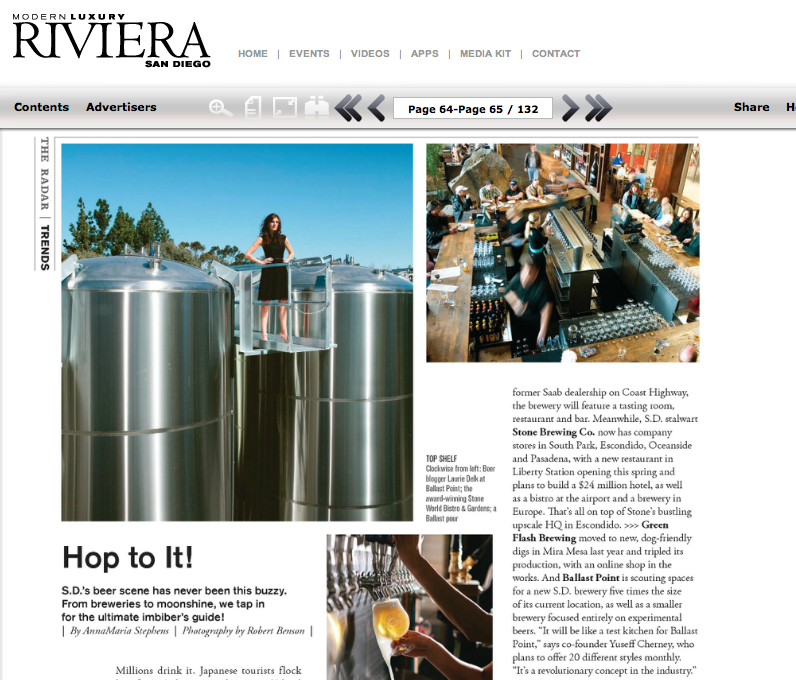 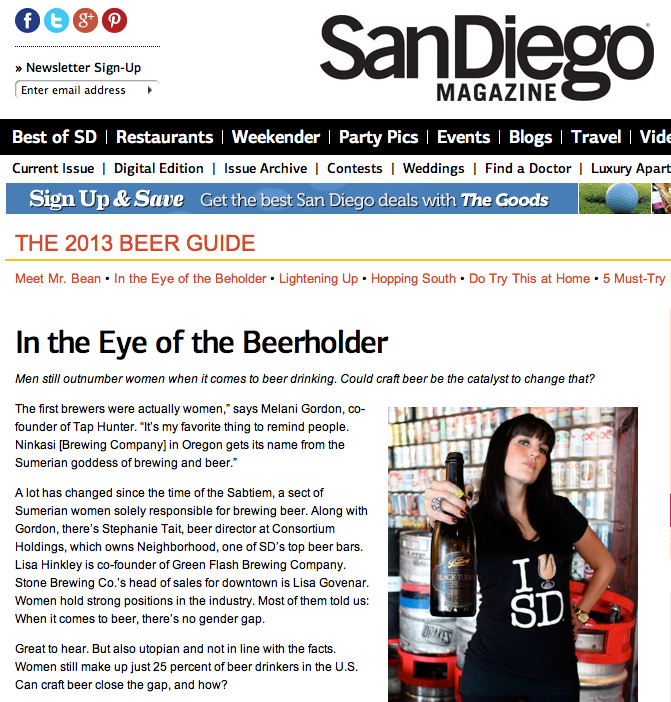 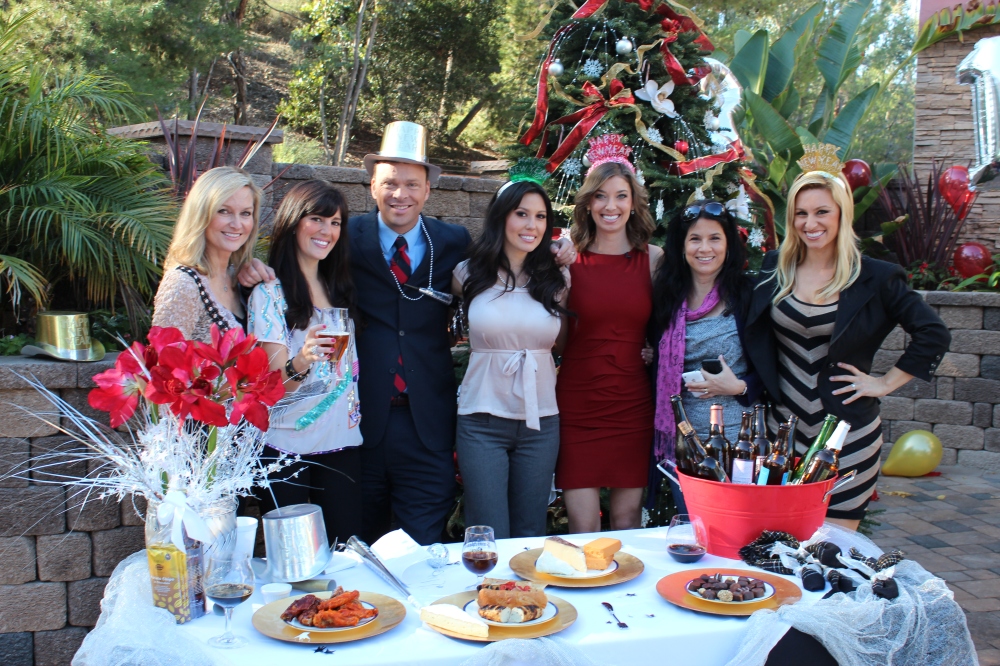 Laurie Delk from 100 Beers, 30 Days virtually stops by to answer our questions.

What do you like more: drinking beer or blogging about beer?

Hahaha. Are you serious?? Drinking. Definitely drinking. I adore writing, but the real joy is in the experience. I try to share that with people as much as possible.

What’s the craziest experience you’ve had as a result of your life as a beer blogger?

Public recognition and international fans. When someone comes up to me and says, “Hey! You’re the 100 beers. 30 days. girl! I love your blog!” That just blows me away. And to have amazing fans in countries like Sweden, Italy, and Australia that regularly follow and comment. Wow.

Hmm. Tough one. Probably the post entitled “Saints, Penguins, and Zee Germans.” about Brewdog’s James Watt visit to Stone Brewing. We tasted the Tokio, Tactical Nuclear Penguin, and Sink the Bismarck that night. It was mind-blowing. Their beers inspire me and make me a better writer, I swear.

Where can we find you blogging about beer? (A physical location, like Perez Hilton and Coffee Bean and Tea Leaf.)

TapRoom or Pacific Beach Ale House in Pacific Beach. They are within walking distance of my house, and always have good beer flowing. A must for creative writing.

I’ll admit up front that I’m a bit of a latecomer to the whole craft beer thing. If it were not for my son and his insistence that I expand my horizons beyond “yellow fizzy beer” as the people at Stone call it, I probably would still be calling my occasional forays into Sam Adams and Guinness adventurous.I’ll always stick to my rule that if it tastes good to you, drink it. That goes for beer and wine as there is a time and place for a crisp cold light beer and even a chilled white zinfandel on a hot summer afternoon. Wait, did I just say that? Yes I did. You get my point; drink what tastes good to you. That said, if you limit yourself to the beer of the masses, you are really depriving yourself of a wonderful experience.

I recently met Laurie Delk, an emerging expert and chronicler of the craft beer movement. Laurie tends bar at The Lumberyard Tavern & Grill in Encinitas and I became aware of her blog , when I Licked the Plate there a few months ago. The blog has become a bible for beer enthusiasts internationally and I would highly suggest it to both rookies and veterans alike.

Here are some highlights from a recent conversation with her.

Lick The Plate: Let’s start with your background and what lead you to be such a beer aficionado.

Laurie Delk: My background is actually in wine. I was general manager of a wine shop in New Orleans for several years. I taught classes, helped customers organize their cellars, and conducted tastings. I have taken classes from UC Davis and lived in Italy where I worked a harvest with a prestigious Piedmont winery. I honestly thought wine was what I would do for the rest of my life! Then about a year ago, I discovered the wonderful world of craft beer and I haven’t turned back. Wine will always have an important place in my life, but the craft beer movement is incredibly exciting right now.

LTP: Do you recall the first time you had beer paired with food, was there an ah-ha moment where you realized that beer could compliment food as well as wine?

LD: The first time I had beer paired with food purposefully was a tasting in the wine shop with various cheeses and wine versus beer. With each cheese, one wine and one beer was selected as a pairing to uncover which was the better match. We did six pairings, and amazingly beer won five out of six times! It was a tremendous revelation for me. It wasn’t long after that I had my idea for my blog.

officially on the map as a craft brew powerhouse. What is your take on the local craft beer scene?

LD: I think the craft beer scene here is brilliant. I am literally in beer heaven here. I am consistently blown away by the marvelous offerings of breweries like Lost Abbey, Alesmith, and Ballast Point. I also love Pizza Port, Green Flash and Stone.

LTP: You have obviously paired a lot of food and beer. Can you run through an example of a multi-course meal and describe the beer pairing with each dish?

LD: Given the season, start with a gazpacho or a light summer salad with grapefruit wedges and light citrus vinaigrette pair beautifully with a Saison such as Goose Island Sophie. For a main course a Maple Glazed Salmon, paired with a delicious Ommegang Abbey Ale. For dessert go with a Dark Chocolate Lava Cake with Raspberry Coulis paired with a big, rich stout like yummy Green Flash Double Stout. If you like coffee with your dessert, skip it and try the Nils Oscar Coffee Stout. It’s amazing.

LTP: Have you worked with Chef Ryan at the Lumberyard Tavern to develop beer pairings with menu items?

LD: So far, I have been pairing our specials on Thursdays, Fridays and Saturdays with both a wine and beer to give our customers a range. Ryan and I have definitely discussed working together on menu items, so I look forward to working with him in the future on more pairings.

Per Laurie’s suggestion, I recently paired a Humboldt brown ale with pulled pork sandwich and sweet potato fries at the Lumberyard Tavern. Consider me a convert.

In the month of November, Laurie Delk, general manager of the Cork and Bottle wine shop (3700 Orleans Ave.) will drink 100 bottles of stout and porter in 30 days to raise funds, food & awareness for the Second Harvest Food Bank.

Every Tuesday this month at Clever, Cork and Bottle’s adjacent wine bar, you can join Laurie for a free sample of four stouts and porters. Donations of non-perishable food and cash will be accepted. On Wednesday, November 25, at 8pm, Laurie brings her project to the Avenue Pub – bring a can of food to receive one dollar off a pint of stout or porter. Other events will be announced (and beers critiqued)at 100beers30days.wordpress.com.

“For me, beer is for when my palate is completely fatigued from wine,” she said. “There is nothing like a beer to refresh me and wake me up.”

No chance of failing to complete the task, “I am a beer drinker. I can drink some beer.”

By Todd A. Price

In the month of November, Laurie Delk will let her life be guided by the classic song “99 Bottles of Beer on the Wall.” The general manager of the Cork and Bottle wine shop (3700 Orleans Ave.) will drink 100 bottles of stout and porter in 30 days. Although such a worthy project needs no justification, Delk is using her personal quest to raise food and funds for the Second Harvest Food Bank.

A pint of Guinness stout.Every Tuesday this month at Clever, Cork and Bottle’s adjacent wine bar, you can join Delk for a free sample of four stouts and porters. Donations of non-perishable food and cash will be accepted. On Wednesday, November 25, at 8 p.m., Delk and the Avenue Pub (1732 St. Charles Ave.) team up for a food drive. Bring a can of food to receive one dollar off a pint of stout or porter. Other events will be announced at100beers30days.wordpress.com, a blog where Delk chronicles and critiques the beers she drinks this month.

Although Delk is in the wine business, she is no stranger to beer. “For me, beer is for when my palate is completely fatigued from wine,” she said. “There is nothing like a beer to refresh me and wake me up.”

And what happens if she fails to finish 100 different bottles this month? “I won’t,” she said. “I am a beer drinker. I can drink some beer.”