Well that’s only if you haven’t been drinking stouts and porters, friends…  No, I am not dorking out for no reason, I had to quote Shakespeare if I am tasting a beer named for the chap.

I would like to extend a big thank you to those who came out and supported me at d.b.a on Monday night! I know it was raining, and a Monday (after a Saints game), and it meant the world to me that you came anyway! And a GIANT THANK YOU AND HUG to Michael at d.b.a. for all of his support of me and the cause.

And the music…..well Glen David and James Andrews are just AMAZING.  Check out the fan photos on my facebook page to see those guys.  Wow.  I mean wow.  If you live in New Orleans, you HAVE to go see them.

So what did I drink on my musical beer adventure on Frenchman Street?

Rogue Mocha Porter: ABV: 5.3% My first beer of the evening was the always easy and delicious Rogue Mocha Porter.  A porter that looks and acts like a stout.  I can’t tell you how many late nights I have sipped on this beer at d.b.a. engrossed in cosmos-altering conversation.  Ok, so the conversation wasn’t all that, but it was for us involved.

Originally named New Porter, in honor of the home of Rogue Ales, Newport, Oregon, this brew has just what you expect on the nose and palate. Mocha. That cocoa powder on coffee aroma, rather than the liquid chocolate nose of a beer like the Rogue Chocolate Stout or Young’s Double Chocolate Stout (that one’s coming up!).

Add to that  lots of vanilla aromas, which rounds out that dry chocolate and makes it an easy, comforting, nose.  There is some bitterness on the finish, but overall this is a smooth, drinkable beer that I could easily slug more than one of.  As I almost did Monday night…But I was a good girl, and moved on to the….. 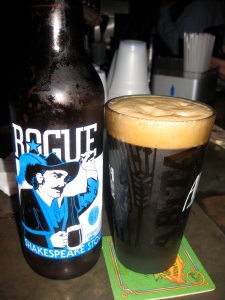 Rogue Shakespeare Stout: ABV: 6% Whoa, what a difference from one Rogue to the next! Pours out darker and thicker, with a big lingering head. According to the Rogue website, “Ebony in color…”  Ebony and Ivory folks.  I’m Paul McCartney in overalls in the back of a hay truck with this one.

Dates, dried dark fruit, and dark chocolate dominate the nose.  As it warms, molasses, spice, and a touch of tobacco.  Nice.  This has far more dimension than the simpler Mocha Porter.

There is a LOT more bitterness on the Shakespeare, that kicks in right from the start and crescendos from the mid-palate to the finish.  I enjoyed this beer, was pleased by the bitter notes,  and can see myself imbibing on this one again.  And with that low alcohol content, it’s actually possible. After all, we live together in purrrfect harmony.  Awwww. 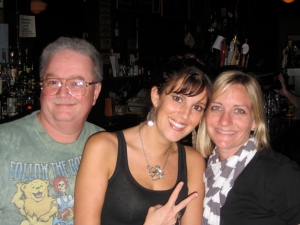 Young’s Double Chocolate Stout: ABV:5.2% Well this beer is…and this is the BEST possible description I can give you, a liquid brownie with nuts. With some marshmallows. No kidding.  If you want dessert, and don’t have any eggs, crack open one of these.  I can’t even tell you how many of these I have sold to women, describing it just like that.

On Monday night, I drank it from the can, but for “research purposes,” I plan (not for counting) from the bottle and draft. I gotta make sure I don’t eat before though. I don’t know how many calories this sucker packs, but it’s gotta be alot.  Drinking it is something akin to licking the beaters on a mixer.  So prepare yourself.  Consequently, this one went down a little slower than the others…

But hey, it’s a DOUBLE CHOCOLATE STOUT. What did I expect?