First of all, I would like to extend a HUGE thank you to Dylan Lintern of NOLA brewing for inviting me to one of the BEST tastings, beer or wine, that I have been to in a long time.  It was truly an educational and downright fun as hell time. And thank you to Derek who allowed me to try his homebrew, and all of the people who came to the tasting.  I love to talk to people who know ALOT more about something than I do.

The first beer of the evening. Nice notes of bread, light caramel, and lots of honey, both dark and light.  Brewed in the Biere de Garde Style. For those of you new to the term, it refers to a type of beer traditionally brewed in France. Similar in ways to a Saison, Biere de Garde brews are bottle-conditioned, typically matured for a period of time after bottling, and are often intended for cellaring.

This offering from Lost Abbey was a great and welcoming opener to the delicious onslaught that lay ahead….

Nice. Mmmm, I love Saisons. Apricot, bread dough, and a little funk. Lots of carbonation, too much for some in the group. Refreshing, as a Saison always is for me. Like at the end of a wine-tasting day (20-30 wines folks) at the shop, there is nothing like a Saison for my tired palate. This is a RARE beer.  Not released to the public, this beer was made to honor the memory of Dave Levonian, homebrewer and friend of Port Brewing.

Wow. This was one of the beers of the night.  Aged in 39% Cabernet Sauvignon barrels, 35% Chardonnay barrels, 13% Port barrels and 13% Bourbon barrels. Notes of black currant (from the Cabernet barrels), light Provencal herb, bread yeast aromas (from the Chardonnay barrels), brett. Nice, balanced sourness on the palate.  Not cheek burning.  Also an extremely RARE beer.  Less than 130 cases were produced with it only being sold in the Avery Tap Room on September 23, 2009. What an honor to have this beer.

Whoa. Talk about a palate wrecker.  I honestly sat there for a few minutes, afraid to drink it.  But the temptation was too strong, and I figured, when am I gonna get the chance again? I timidly took a baby sip…..a literal assault. So hoppy there aren’t words, rich deep herbal and citrus nose and the palate was….well 1 guess folks. I have never tasted something so hoppy bitter in my life. Seriously.  I liked it though, and I know some folks out in So-Cal that would LOVE this beer. It took SEVERAL swigs of water to be ready for the next beer. What a great experience.

For those of you saying, “What in the hell does 135 IBU mean?!?!” IBU stands for International Bittering Units. Think of your average American lager (Budweiser, Miller) and you are looking at 10-15 IBU. Your average British bitter? 35-50. People ask me, “Have you had that Sierra Nevada Torpedo Extra IPA? Wow, it’s hoppy!” That’s at 65 IBU folks.  You get the gist.  So IMAGINE 135 IBU’s.Think about that….

Lots and lots of caramel and light brown sugar with a touch of dried date on the nose.  Follows through on the palate.  Did not strike me as overly Belgian, but more reminded me of several of the British porters I drank in my 100 stouts and porters in 30 days.  A nice, warming beer for the cold, excuse me, FREEZING nights we have all been experiencing!

Everyone in the group, except me I think, like the Achel better.  I, always the odd bird, preferred this one.  Nice, lighter honey notes on the nose, with light yeast and herb on the palate.  For me, a more drinkable beer.  Maybe I’m still recovering from the porter/stout onslaught. 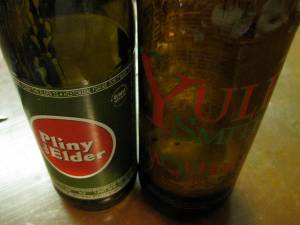 I really enjoyed this beer. Comforting, yet vibrant hoppy nose.  Subtle aromas and flavors of cardamon, vanilla, and toasted nuts.  Loved the balance of the nose with the palate.  Well done Alesmith.  Yummy, and would definitely drink again.

There was some discussion whether this beer should be classified as an English-Style because of its high ABV. Your little grasshopper here learned that generally English Barleywines have a lower ABV of 7-9%.  At any rate, this beer was in my words “a brown sugar and caramel blanket.” Mmmm, so comforting.  Lots of dried fig and prune on the nose with sour funk, which then inspired me to break into singing “Bring us some figgy pudding”.  Ahhh, good times.

Folks, I have been waiting to try this one for a long time.  So those of you who know me, know I gave a woo-hoo with arms raised in true cheerleader style when this one came out.  In fact my first written note on this was “Oh God.” I LOVE THIS BEER.  Beautiful nose of fresh herbs and freshly sliced tree fruit (think peach, pear) One of the most balanced beers ever.  Seriously folks, put this at the tippy TOP of your list of beers to try. Delicious is an understatement.

Double whoa. This beer is NOT kidding around.  One of the best quotes of the night? “It’s like a warhead in your mouth.” -Dylan.

This American Wild Ale is brewed with raisins and cherries and is aged in Bourbon barrels for one year with cherries and Brettanomyces.  Extracted dark, dried fruit. Tart cherries and oak.  Tons of raisins on the nose, but not as much on palate.  Super sour cherries on palate. When you put your nose in even the empty glass, explosions of fig and raisin greet your curious schnoz. This beer is a humdinger folks. Prepare yourself.

Barrel aged for 9-15 months. Brett. Brett. Brett. Hay. Barnyard. But for those wine readers out there, you have to think differently from the way Brett expresses itself in wine.  It’s not the same.  Which spurred a thoughtful, insightful conversation at the tasting.  To be continued….

Nice citrus notes. Bread. Yeast.  Reminds me of a funky Champagne.  Sure enough, this beer is aged in French oak Chardonnay barrels for 12 months. A truly interesting and fantastic beer.

This was DEFINITELY one of the beers of the night.  Thank you, Dan. X 1 million. And what’s more? This was from batch 001 folks.  Yes, that’s right the very first one.  “How do you know its the 1st batch?…..(pause)Because it says batch #1.”- A conversation between Dan and Vasu. I got a giggle.

This badass is aged 12 months in Pinot Noir barrels, with cherries and 3 strains of Brettanomyces, Lactobacillus, and Pediococcus added.  Friends, it is like a tawny port, with raisin, fig and the best dark honey you have ever had.  Add to that light brown sugar and cherry.  Seriously complex and amazing.  So balanced and incredible it’s hard to maintain composure.  At least for a dork like me.

This beer is brewed with cocoa nibs, Aztec cocoa powder, chilies, honey and annatto.  Unusually, there is no cocoa aromas on the nose, but arrive on the palate.  Instead the nose could best be described as musky. And confused.  As Vasu noted, “it’s troubled.” I concur.  With a very light entry, it’s not what you might expect.

Wowza. From the very first beer cracked, this brew from 1998 was under discussion.  A Lambic from 1998. You heard me. Oh God. HORSE BLANKET. FARM. BARNYARD. With a touch of strawberry hiding in the stable. A truly wine-like beer drinking experience.

Waxy aromas.  Lots of sour notes here guys.  Cidery and musty. As expected, from entry to finish.  Intensifies as it warms.  Yep, it’s a Gueze alright.

From the homebrewing prowess of Derek comes this Imperial Sour Stout.  What a great nose.  Chocolate covered cherries.  No kidding.  With dark caro syrup. The sourness is gentle compared to the two previous beers, but is still there and nicely balanced.  Well done.  A very enjoyable brew.

Tamari almonds straight from the Whole Foods, soy, espresso, dark dried fruit.  I want this for breakfast.  Brewed with espresso, this beer packs a punch in caffeine and alcohol.  What a great way to wake up!

This funky doppelbock was both a sweet and sour nose with lots of maltiness.

Brewed with Community Coffee with Chicory. Of course great coffee aromas and that spicy bark quality of the chicory.  Think not quite licorice.  Charred wood.  Followed by….

Bright herbal and wild green flower notes. Follows through nicely on the palate. And then…..

WE MIXED THEM!!! Great vibrancy! The herbal mixed with the coffee was a refreshing mix.  I like it!  Great job guys.

My palate is starting to fatigue.  And I’m obviously feeling the alcohol by now.  Lots of toffee and malt on the nose.  The only Unibroue I haven’t tried.  Would definitely like to give it another go sometime.

I’m gonna need “hair of the dog” after this night.  This beer is a Flanders Red and aged in American Oak and Sherry barrels. And boy you get that American oak on the nose, just like in a California Cabernet. Tons of barrel mingled with herbs. This beer is named in memory of Michael Jackson.  Not the singer people.  The beer guy. Look him up.

By now it’s difficult for me to discern subtleties in aromatics and the palate.  Don’t get me wrong, I am a seasoned taster, but there is so much incredible complexity in so many of these beers, my brain, nose and mouth are joyously suffering from sensory overload at this point.

The last beer available to my palate.  And it was deeeelicious. Nice herbal, fresh floral aromas with a subtle honey note. Perfectly balanced and drinkable.  I could sit down with this beer for the evening. And oh my God, they have a holiday ale titled Sleighr, in the font of Slayer.  And for those of you who know me and what a fan I am, you know my eyes lit up when I saw that. I HAVE to get this beer. Anyone can help me on that?

I have no idea folks. My palate was wrecked. I’m gonna guess hoppy. Sorry Victory. Next time I promise.

Ditto.  I do remember nice rich notes of molasses and dark brown sugar, without the cloying aspect of other Baltic porters I have tried.  And I liked it very much. But concise, thoughtful notes? Next time. Did not get a fair shake, so will have to try again someday.

AND THAT my friends, concludes one of the best and most interesting tastings I have been to in a long time, beer OR wine…..